Toritsuka, Shinoda, Takayuki and Shinya formed the band Eternal Diamond Veronica for the school festival. Their main reason for creating the band is to be popular among the women, but without the knowledge of using musical instruments. Toritsuka really wanted to play so he seeked Kusuo for help.(Toritsuka was assuming that using telepathy, he and his friends could play), and was conceited that the four didn't practice at all until the day of their performance. Although it ended in terrible consequences, it was still a fitting victory for Toritsuka who was possessed by John Komatsu who he summoned when he sang. 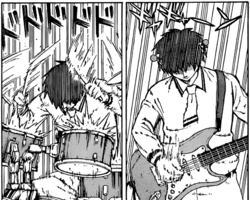 Kusuo showing off his musical skills. 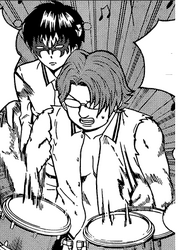 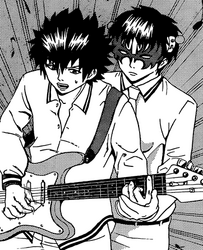 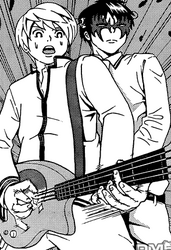 Kusuo teaching Takayuki to play the guitar.
Add a photo to this gallery
Retrieved from "https://saikikusuo-no-psinan.fandom.com/wiki/Eternal_Diamond_Veronica?oldid=8559"
Community content is available under CC-BY-SA unless otherwise noted.