First announced in the second issue of Shueisha's Weekly Shonen Jump Magazine of 2013, Namco Bandai Games stated that they would be releasing the "ultimate Jump game." Previously named Project Versus J, it was made to commemorate the 45th anniversary of Jump.

Hironobu Kageyama, Akira Kushida, and Hiroshi Kitadani sang the game's theme song "Fighting Stars." People who pre-ordered the game received the J-Stars Victory Book, a volume bound like a Jump Comics book and filled with information and visuals of Jump heroes over the years. The localized version of the game came with a digital compendium. A free augmented reality (AR) app lets you see the Jump heroes in your surroundings on the PS Vita.

J-Stars Victory Vs lets up to four players battle it out against one another in a gameplay and graphical style similar to those of Dragon Ball: Zenkai Battle. Fighters can move and fight in all directions of a 3D battlefield. Players should learn the lay of the land and formulate a battle plan with a character suited to it. A defeated character comes back after a set amount of time passes. To win the battle, all three sections of the WIN gauge at the top of the screen have to be filled; the gauge fills one section each time an opponent is defeated. Fighters can use regular attacks, power attacks, area-based attacks, and finishing moves. Regular attacks are the main part of the battle, and all combos begin with them. Power attacks leave the user open, but they have a big impact if they connect and their power can be increased by charging them up. Area-based attacks allow to hit opponents over a wide area. By using different techniques, the player can lead his team to victory; learning each character's different power, range, and effects are the first step towards being unbeatable.

At first, only Luffy, Toriko, Naruto, Gintoki, Goku, and Ichigo are available at the start. The rest of the characters must be unlocked through the Story Mode or purchased at the Store.

All the characters who make a cameo appearance either in Story Mode or as part of some character's moveset. 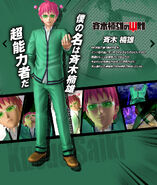 Kusuo in J-Stars Victory Vs

The Japanese magazine Famitsu gave the game 32/40, with all four reviewers giving the game 8/10.