In the game, players will be able to use various superpowers such as telepathy, psychokinesis, and x-ray vision. The characters in the game will be in chibi form.

On the game's official website the staff will take suggestions from fans regarding what kind of psychic abilities fans want in the game. Those whose ideas are chosen might also appear in the game. [1] 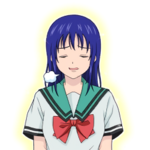