Takahashi (高橋, たかはし) was first introduced in Asou Shuuichi's One Shot Volume 0 as the thief who took everyone's wallet. He framed Riki as the thief but his plan failed when Kusuo used his power to make him feel guilty. He is friends with Shuuji and Jaga and they are often seen together.

Takahashi is a normal slim man. He has a green curly hair and black eyes. He has a thick lips.

He usually wears a PK Academy uniform but with a dark pink shirt.

According to himself, he had leg hair.

He is a pervert who loves peeping on women while they bathe, but he is disgusted by Nendou Riki when giving him mouth-to-mouth.

He also a faker, as seen when he faked that he was sick so he could skip class. When caught he refused to own up to it and tried to pass the blame onto Nendou, who had no idea he was faking and was the one to take him to the nurses office.

He also bullies someone if he or her mocks him, and inviting more people to hep him bully the hostage.

He is terrified of his PE coach, Matsuzaki, and tried to prank him with a fake love letter as revenge.

Overall, not a very nice guy. 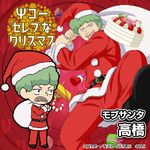 Retrieved from "https://saikikusuo-no-psinan.fandom.com/wiki/Takahashi?oldid=14240"
Community content is available under CC-BY-SA unless otherwise noted.