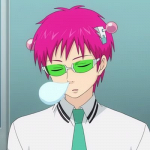 Hi! The name is Saiki-gami, but you can also call me Mari. I am one of the wiki administrators and I try my best to make this wiki better for you and everyone else.

We appreciate all the help, rather big or small, so feel free to help out as much as you can :D

Retrieved from "https://saikikusuo-no-psinan.fandom.com/wiki/User:Saikigami?oldid=14529"
Community content is available under CC-BY-SA unless otherwise noted.